Some people believe that January sale purchases are impulse buys, so, before you head out to your most-loved department store or put all the goods in your online basket, take a step back and consider whether you actually need it. Every year the amount of money we spend in our favourite stores, such as Debenhams and Harvey Nichols, increases. Find out exactly how much we each spend in the January sales below. When Do January Sales Begin vs When Did They Begin?

Some of us no longer call the sales that commence in January the ‘January sales’ as many UK department stores and online retailers, such as Debenhams and other clothing retailers, start their post-Christmas sales as soon as Boxing Day. However, even though a number of high street stores start as early as December 26th or December 27th, many of these sales last until mid-January.

If you’re an avid shopper or love a bargainous deal, you’ll be pleased to know that some big-name brands, such as Fortnum & Mason and Hamleys, host their own sales at different times of the year. Over the last few years, however, January sales have started as early as the beginning of December, which is ideal for those who want to save on their Christmas shopping. Are you a part of the 24 per cent of UK consumers that claimed that they don’t know how much they intend to spend in the January sales? To the surprise of many retailers, despite recent inflation and the uncertainty surrounding Brexit, a jaw-dropping 43 per cent of UK consumers planned to spend approximately the same amount in the January sales in 2016, and only 6 per cent planned to spend a lot less.

The Boxing Day and January sales can be the perfect time to stock up on birthday gifts for the oncoming year. Boots UK, for example, is offering up to 50 per cent off top brands, including Jack Wills, Ted Baker and Soap & Glory, as well as 3 for 2 on selected products throughout the store.

Despite the success of in-store shopping, many of us are turning to online shopping channels to avoid the stress of aimlessly wandering round a shopping centre and holiday arguments, and thanks to developing technologies, this is more possible than ever. It appears that spending is on the rise in the January sales too, with 14 per cent of UK consumers claiming they would spend more in the January sales in 2015.

Not only can rising inflation significantly affect monthly internet retail sales value, but poor wage growth can also impact consumer spending. In January 2017, for example, retail sales divided at 14.8 per cent. This could be due to the fact that many consumers are far more cautious when it comes to spending money in January. But what do we spend our money on in the January sales? According to statistics, 63 per cent of consumers planned to buy clothing and accessories in the January sales in the United Kingdom in December 2014 and 2015. However, -3 per cent of UK consumers are seeking new smartphones, tablets and computers at the start of the New Year, and -4 per cent are hunting for new homeware and furniture. This can be for several reasons. Not only are mobile phones, tablets and even computers often gifted to a loved one as a Christmas present, and thus they do not have to go out and buy their own at the beginning of the year, but consumers appear to be far more focused on purchasing discounted toiletries, beauty products and perfume by high-end brands, such as those that can be found at department stores. In January 2017, the quantity bought in the retail industry is estimated to have increased by 1.5 per cent compared to January 2016 – the lowest growth seen since November 2013. This could be a result of the average store prices, including fuel, increasing by almost 2 per cent throughout the year. As average store prices increased, online sales parallelly increased by 10.1 per cent year-on-year, but fell at the beginning of the year by 7.2 per cent.

There are numerous factors that impact ecommerce sales, including the convenience of shopping online during busy periods, competitive pricing and exclusive loyalty rewards. Many UK consumers may turn to the internet throughout the festive season to grab the same item for less, or to simply avoid fighting through a crowd of unsettled people scrambling around to find the item on sale in their size. 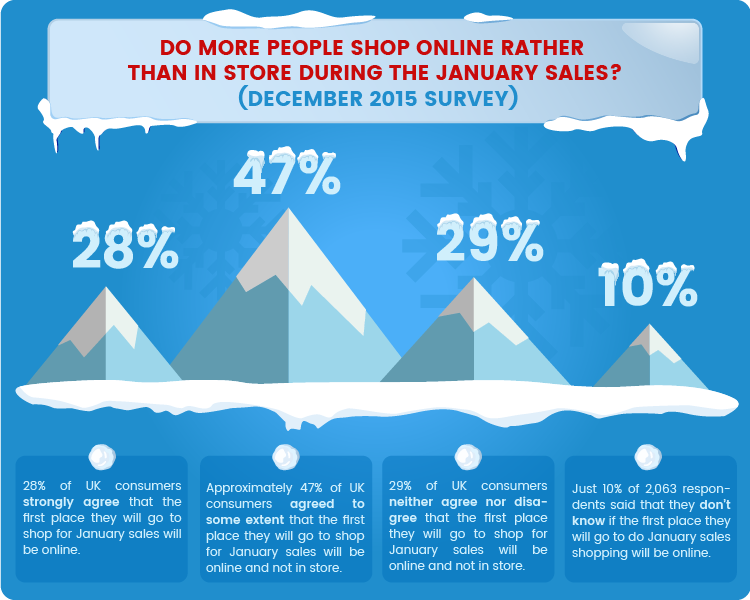 Do More People Shop Online Rather Than In Store During The January Sales? (December 2015 Survey)

How much did you spend in the January sale this year?

Generic advice is not a service regulated by the Financial Conduct Authority.