Eating out is a much-loved pastime by most, but despite the growth in popularity, prices definitely aren’t getting any cheaper! In some cases, food fans can feel like they need to save for weeks before being able to afford a decent meal at a top restaurant. In the UK, we’re treated to some of the best and most delicious dishes from around the globe, but what is the real cost of eating out in the UK? Here at Wizzcash, we’re exploring just that, so read on to find out! 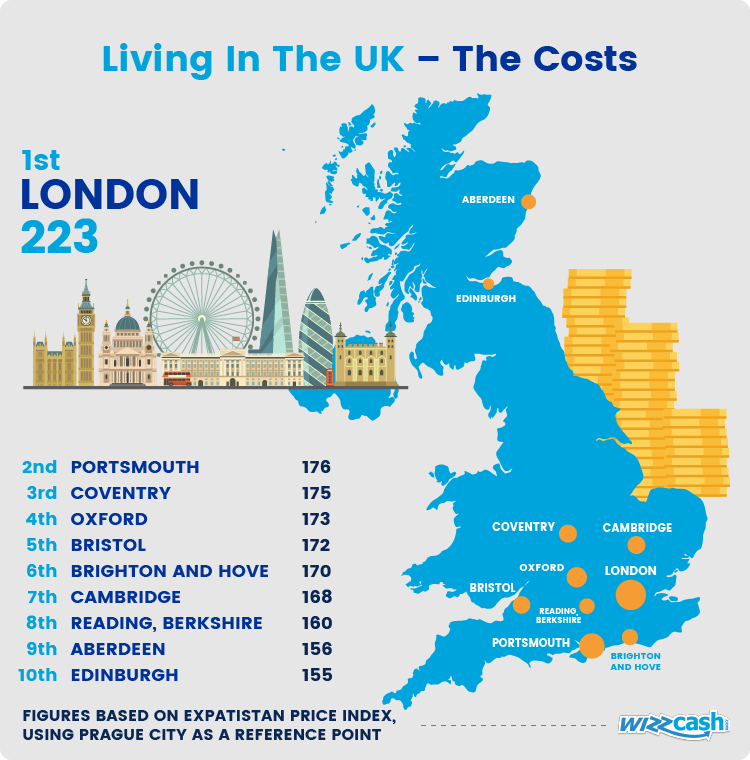 You’d be hard pressed to understand the true scale of the cost of eating out in the UK without first knowing what the general living costs are and that’s why we’ve taken a look at exactly that. Within the UK, different cities are more affordable than others and determining their affordable can all come down to comparing them to one another.

According to Expatistan, who have provided a useful price index calculated through the use of a reference point (Prague in this case!), London is undoubtedly the most expensive city in the entirety of the UK at 223% more expensive than Prague which is quite a considerable amount. Portsmouth is the second most expensive at 176% higher, Coventry next at 175% higher and Oxford and Bristol taking fourth and fifth place with 173% and 172% respectively. The amount that families are spending on eating out ultimately depends on size, income and lifestyle. Retired individuals on a state pension, for example, are likely to spend £10 a week when alone, or £30 a week for couples, while Non-retired couples will spend £27.40 a week alone, and £67 a week for a couple.

Families, as you might expect, tend to spend more, especially when children are involved though interestingly, one adult with one child will only spend £22.50 a week compared to the two adults spend of £67. With two or more children and a single adult, the average spend is £32.60 a week. The ‘two adults’ prices with one, two and three or more children typically double or more despite only one more adult being involved! Students aren’t widely known for their extensive budgets so you might be surprised to know just how much the average student is expected to spend on lunch, dinner, or even a drink! The average restaurant lunch budget for a student, according to the University of Edinburgh, is £15-20! While this is only a guide price, students are known to be willing to spend between £10-20 for a dinner, especially when attending lunch with flatmates or friends from classes. The average restaurant dinner spend isn’t too much higher, sitting at £20-35. This can ultimately depend on the student, the restaurant they’ve chosen to attend and how close to student loan payday they are!

Of course, we can’t mention eating out as a student without mentioning alcohol, and you might be surprised to find that the willing and suggested spends for beer and wine is quite low. With a beer averaging at £3-5 and a small glass of wine averaging at £3-4.50, this is surprisingly low compared to the dinner and lunch costs. As you might expect, eating out in any city is going to set you back some, with some cities leaving a far more significant dent in your budget than others. Dinner for two at an Italian restaurant in the expat area, for example, varies greatly! Including appetisers, main course, wine and dessert, the average dinner spend for a couple in London would be £63, with only Coventry and Oxford beating them out on costs at £64. From there, the other cities in the UK are considerably lower.

Brighton and Hove sits lowest on our list at just £47, with Edinburgh just above at £49 and while this is still an eye-watering cost for some, it’s important to remember that these are the top cities! The costs can be considerably lower in smaller towns and villages where demand and necessity might be lower.

While eating out can come with hefty costs, it certainly doesn’t have to and restaurants themselves are making it easier than ever before to pick up a cheaper bite to eat without compromising on quality. Finding vouchers and coupons is becoming increasingly easy, with more and more restaurants offering price cuts and free items to entice customers in to eat. This isn’t just a case of smaller brands, either. Even bigger brands with a solid customer base are offering these vouchers, including the likes of ASK, Bella Italia, Zizzi, Pizza Express, Strada and Café Rouge!

The number of restaurants offering discounts via voucher has grown exponentially since 2015 and this could be down to increasing business costs and rates. This increase has introduced increasing pressure on restaurants to fight for customer base, even when it seems like they’re in a sturdy position. Customers might be benefiting from these vouchers, but restaurants could be relying on them! With all of the above in mind, you might be surprised to know that takeaways are actually becoming the nation’s favoured method of getting food without needing to cook! In the past ten years alone, the takeaway market has seen a growth from £2.4 billion to almost double and is currently sitting at £4.2 billion. This 73% increase also encompasses a 20% increase in delivery orders with February 2018 seeing a whopping 673 million deliveries!

From this, we can see that more and more people are opting for ordering food to their home as opposed to going out to eat. The ease at which people can click through an app (16%), order online (38%) or over the phone (46%) is drawing customers in and restaurants are quickly starting to capitalise on this. Delivery firms are cropping up with increasing speed and popularity – they’re introducing the possibility of delivering food to customers without a restaurant having to cater for this delivery directly. Deliveroo and Just Eat are two of the most popular to date and both cover a whole host of different smaller, local restaurants across different food types.

In 2017, Chinese takeaway was the UK’s favourite, with 179 million servings taking place over the year and pizza wasn’t far behind at 171 million – that’s a lot of slices! While burgers and curry fell short of order numbers quite as high as the aforementioned alternatives, burgers still sold 82 million servings in 2017 and curry reached 70 million!

Eating out – or in! – in the UK will come with a cost that not everyone has always been able to afford, but with the increasing availability of restaurant and takeaway options making it easier to get hold of delicious food without needing to cook, it’s no surprise that families across the country are paying out for the privilege.